"It's Just A Number!": My Thoughts on Sharing PFT Numbers

Here I go getting myself into trouble again, but this has been on my mind for a while. This is not a shot at people who share their PFT numbers. If you choose to share your PFTs with others publicly, that's great. If you like to know other's PFT numbers are because it helps motivate you to be your best, then by all means, please continue to do so. All I want to do is share an opinion that I have and that I know others have too. Love and respect to all who read this. 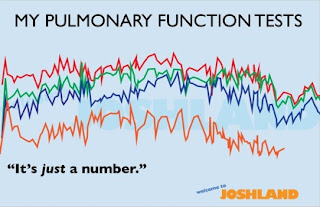 As soon as you saw the title of this blog post, I know you got a little curious. And now, as you look at the picture to the left, you're asking yourself two questions:

2. Why aren't they posted as a part of the photo?


Both are valid questions, so let me start answering them by telling you a story I've only referred to in previous blog posts:
______

It was 1991. I was a "tweenager" at the time and the routine was always the same. If my sister, Angie, happened to be in the hospital for one of her extended stays, then my mom and I would go visit her as soon as my CF clinic appointment was done. We would stroll into her room and I'd have a big smile on my face, so proud that my numbers were off the charts and that my health was at it's peak, despite being a teenage fool and skipping many a med and treatment.

Angie's first words to me were the same at every visit, spoken out of concern and curiosity: "Hi (insert sisterly insult here), how was your appointment and what were your PFT numbers?"

Without a second thought, I trumpeted my numbers to her with such a callous tone as if they were no big deal and took little effort to accomplish. Not because I meant it that way, but because at the time it was the truth and I took it for granted. Normally, Angie would say something encouraging to me, giving me a high-five and a big smile. This time she was silent, but she managed to force a smile to her lips. I thought nothing of it as I maliciously changed the channel on Angie's hospital TV from "Oprah" to "Chip n Dale's Rescue Rangers". Our visits continued on their normal path without another awkward pause, save the needless argument about what to watch on the boob tube.

Later on that evening, many hours after we came home, I could hear my mother's voice as one side of a conversation trying to soothe the caller on the other end of the line. She was talking to my sister.

"I know it's not fair. You should be as healthy as he is too. I don't know why that's not the case."

"Don't you worry about his numbers. You're doing a great job taking care of yourself. I'm so proud of you and so is your brother."

"Okay. I'll be there as soon as I can tomorrow. I love you, Totsie."

I broke my sister's heart....AGAIN.

The next time I had a clinic appointment, Angie was thankfully at home, curled up on the couch watching a movie. When I walked in the door, she asked me that same question: "Hi (insert sisterly insult here), how was your appointment and what were your numbers?"

"They were good." I replied. "How are you feeling?"

It caught her a little off guard. I think it was the first time I ever asked her how she was of my own accord. Angie smiled and told me a little bit about her day and how she was feeling. The subject of my PFT numbers never came up again in that conversation or at any other time during the rest of our relationship.

I think of that story every time I do a pulmonary function test. I look back at how different our lives were. How she had to fight for every breath and I had two decades where I was, for all intents and purposes, just the sibling of someone with CF. Yes, I had my CF issues, but they were measly in comparison to my sister. I don't have guilt over being healthy. My guilt comes from the fact that Angie never got that same breaks that I did. How every success I ever had was bittersweet for her because she saw what she was missing out on. She was never ever mad at me and she was always proud of me, but she just wanted to be healthy too.

With the CF Community developing this huge online presence, I see this scenario happening again...every single day. There's this push to share our PFT numbers within the CF Community and I think it's ludicrous...borderline insulting. Here's why:

First of all, the Pulmonary Function Test and it's coinciding numbers exist as a medical guideline for you and your doctors so you can visualize what kind of shape your lungs are in. It's the foundation for how you create YOUR healthcare plan because (and I'm beating a dead horse again, but I don't care) CYSTIC FIBROSIS IS AN INDIVIDUAL DISEASE. And while the PFT is meant to be performed the same way and under the same criteria at every CF Clinic, I guarantee you that's not the case. If I performed a PFT at 10 different CF clinics the results would be different every single time. That's not a knock on any CF Center. That's just the truth.

Secondly,—maybe this is just my opinion, but— asking someone about their PFT numbers is (or should be) a CF social no-no. It's no different than asking someone who's heavyset or rail thin how much they weigh or asking a potential date what their measurements are, how well endowed they are, or how much they make before you ask them out. This shouldn't be a necessary qualification toward acceptance. No one should have to feel the sadness Angie felt hearing my seemingly effortless numbers when she was trying so hard with limited success. No one should have to feel the guilt of where their numbers are at. I don't care if your numbers are off-the-charts fantastic or they're at transplant level, they shouldn't cause sadness. Especially if you're working your butt off to stay healthy.

What's that? You think it doesn't cause people pain and sadness? That I'm overreacting? Tell that to the parents I talk to who feel like they're failing because their kids numbers aren't like "Johnny with CF" down the block. Tell that to the young men and women with CF who can't breathe sitting in the hospital doing four treatments a day and countless nebulizers. In every group I'm in on Facebook, in every CF chatroom I've ever been to, there's a discussion about PFT numbers, so the heartbreak and (sometimes the bitter anger and resentment) keeps happening.

Guess what, CF Community? We're not in some @#$#% competition with each other. We're in competition with Cystic Fibrosis and the b.s. that comes with it. The picture at the beginning of this post is an actual copy of my documented pulmonary function test during a portion of my life. I didn't put any of my numbers on it because, quite frankly, it's no one else's business and because my PFT numbers are irrelevant to how your should view your PFT numbers and your journey with CF.

"Josh, what did you do to get your PFTs to go up?"

"Josh, what happened that made your PFTs go down and what are you doing to correct that?"

Those are the key questions that need to be answered. That's the info that needs to be shared. We need to support and help each other through our journeys. Not compare, contrast and criticize one another.

Back in college when my buddies and I used to enjoy drinking an ice cold adult beverage or two, we'd often ask each other: "Hey, how many have you had?"


Before we could reply, our friend Jim would always say:

We'd all laugh, order another round and promptly hide Jim's car keys.

It's just a damn number.