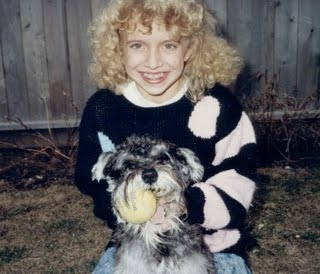 I was about to head out with the neighborhood kids to play baseball for the day when my mom stopped me dead in my tracks.

"You can't go outside today. Maybe later, but right now we need to get in the car and go. I'll tell you why later." Mom said with a smirk on her face. She could hardly hide her excitement. I was not pleased. Over the 20 minute car ride I vehemently squealed my disapproval. I'm paraphrasing of course, but I think it went something like this:

"I want to play baseball, Mom! You always make me go places when I just want to play! I hate it when you do that! Nothing on earth cou....hey...what are all those funny little grey things running around? Puppies? PUPPIES!?!?!?!?!? ARE WE GETTING A PUPPY?!?!?!?! OH MY....YOU ARE THE GREATEST MOM EEEEEEEEEVER!"

Yep. That seems about right.

In June of 1988, we got a miniature schnauzer. I wanted to name him something ridiculous, like Brutus or Hercules, but I was vetoed. Looking back, it was a good choice. "Brutus" the mini schnauzer just didn't fit. Angie named him "Charlie Baby", which I hated. From that moment on they were inseparable. Even though he was my puppy too and I did a majority of the playing/roughhousing with him, Charlie was always Angie's dog. 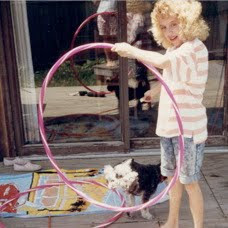 Charlie did all the regular funny dog stuff: Running around like an idiot after he got out of the shower, barking at anything that dared to venture near our yard, playing hide and go seek with us, and "helping" my mom water the garden. Angie even taught Charlie how to jump through a hula hoop and had play dates with other doggy friends like Otto, my aunt and uncle's dog. In the summer, Charlie would race around the pool whenever we went swimming, playfully barking at every splash and every June Angie threw a birthday party for him and invited other dogs over and they all got a piece of Charlie's birthday Twinkie.

Angela was the first person at the U of MN to attempt home IV treatments and therefore was also the guinea pig to the entire home IV nursing process. Charlie did not like this. He knew those ladies with the tackle boxes were evil. Every time the nurse would sit down by Angie, Charlie would sit right between them and let out a little growl. Nothing too threatening, just a little warning to let this nurse know who was boss. Angie would call him off and Charlie would lay steadfast by her side never once taking his eye off of that nurse. With every wince of Angie's face, there was a coinciding twitch of her guardian. When Angie shed tears, Mom or I would have to hold Charlie's collar. He never made a move, but we just saw it in his eyes. NO ONE WAS ALLOWED TO HURT HIS ANGIE.

When she was in the hospital for weeks or sometimes months at a time, Angie would call and leave him messages. Charlie's head would always tilt and his little nubbin tail would wag at the sound of her voice. When she was on home IVs, Charlie followed her around like a bodyguard. In the five years he was with her, he NEVER touched an IV tube. He'd expertly walk over her tubing, almost tip toeing and alternating each foot to make sure he stepped between every strand.

Charlie was Angie's secret keeper, far more secure than any of the diaries that I tried to break into. Behind my sister's chipper and joyful outward presence was a little girl having to make adult decisions and dealing with her mortality at a very young age. While everyone else was busy living their lives, Charlie was Angie's confidant. He never judged her or talked over her. He hung on her every word. He was there when everyone else disappeared. 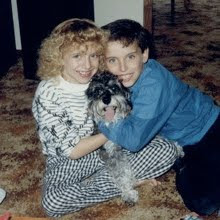 Shortly after she died, Charlie began to disappear intermittently throughout the day. Eventually we'd hear this painful howling coming from her room. Charlie was crying for his girl. It was happening so often that it became the main catalyst for us to clean out her room. Charlie had to move on too because his little furry heart was broken.

Charlie lived for several years after Angie died. We loved him just as we always did, but he was never the same dog. He developed diabetes, which we kept well regulated for a several years, but eventually he started to suffer. The day we put him down was almost like living Angie's death again. Scoff all you want, but I am dead serious. Another piece of us died the moment Charlie closed his eyes. In many ways, he was the last physical link we had to Angela's life. 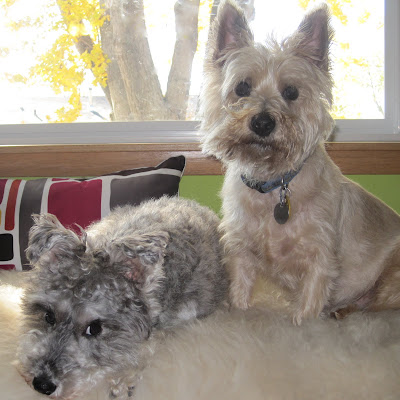 I have two pooches of my own, Oscar the Cairn Terrier (like Toto in The Wizard of Oz, but blonde and chubby) and Henry...our miniature schnauzer. They both drive me nuts but I love them anyways. Perhaps I'm subconsciously putting Charlie traits into our dogs, but I see little traces of him in both of them, particularly in Henry. The snuggler, the hoop and hurdle jumper, the protector...these are all common personality traits of a mini schnauzer. Even when I had home I.V. antibiotics this past summer, both of my boys sat right underneath the kitchen table while my blood was drawn and my dressing was changed. They knew something was up...they just didn't know what to do about it. They've almost yanked my I.V's out on a few occasions. They're kinda like their "dad"...sweet and loveable, but sorta dumb. They're not quite like Charlie Baby. Charlie was a once in a lifetime pet who was as loyal as you could get. He had an unconditional love for Angie that I'm sure resumed the moment he went to doggy heaven.

Today, on Angie's 35th Birthday...I hope she is whooping it up and enjoying a big party with all her loved ones...including her best friend, Charlie.

I miss you and love you with all my heart, Angie. Happy Birthday.

Joshland Note: This post is dedicated to all the pet owners out there who love their pets with all their hearts. They count as kids no matter what anyone else tells you.
Posted by Josh