The Ultimate Game Of "Would You Rather?" 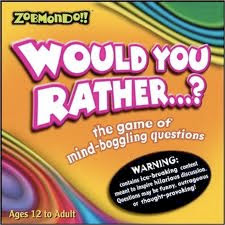 On Easter Sunday, one of my youngest cousins was playing the game "Would You Rather?". She threw out the choice of being smacked 15 times by a grizzly bear or being pelted with a full-grown lion. Those were her exact words. I immediately went with the grizzly bear because chances are that one swipe from a grizzly bear claw would be the of end me anyways, thus making the other 14 hits null and void. The image of having a lion tossed at me seemed to be a slow agonizing death full of lots of chewing.

Not a week earlier, I played this same game in solitude. I asked myself: Would you rather have a progressive genetic disease slowly take you down over time or have a healthy life for almost 60 years only to discover you have terminal cancer with little time left to spare? That's what I asked myself when I found out my father had cancer. Incurable and inoperable cancer.

At the initial appointment with the oncologist, I heard him explain all the options and his prognosis for my father. It was a bizarre and unsettling glimpse into the life of all the caretakers I've met whose loved ones have a health concerns or physical issues. It truly is a helpless feeling staring blankly at the CT scan on the computer screen and seeing the damage...everywhere. Having a nauseous feeling drop like a 3 ton boulder into the pit of your stomach because you know there was nothing you could have done to prevent this and all you can do now is work your hardest to give your loved one the best quality of life. You pray to God, fate, or whatever blows your hair back that some kind of miracle will happen and MAYBE a cure will be found. I am highly trained to BE the sick person, not be on the sidelines while someone else is "in the game."

Because asking doctors questions is what I've done my whole life, I retained enough conscious thought to comment on the findings and provide what little insight I could into this whole situation. If I can be perfectly honest though, the rest of my mind was in la-la Joshland.

The first thing I thought was:

I was just pissed off. At Cancer. At my father. At the doctor. At the way life works out sometimes. Without getting into great detail, I'll just say that my father and I have had a tumultuous relationship and—while things aren't perfect—I think we're both pretty peaceful about where we are right now. We don't need to have any life-changing conversations or rush through any apologies or awkward phases. Those things happened a few years ago because I didn't want to have regrets or circumstances cloud our words. We can't change what happened in the past...we can only focus on the time we have right now. I love my father and he knows that. He loves me and I know that. That's all that really matters.

Now it's a game of juggling my daily life and health issues while being there for my dad as much as I possibly can. After failing miserably at rearranging my daily routine to attend his first few appointments, my wife and I decided that I needed focus on my own health issues first. I'm still recovering from my recent hospital and home I.V. stint. If I start missing treatments and exposing my already weakened immune system to a hospital setting, then it could be detrimental to my overall well being and create other issues that might prevent me from being with my dad at a more pivotal time. I hate that I have to rank the importance of these appointments because they are ALL important, but that's the reality of the situation. Both of my parents and my wife wholeheartedly agreed.

I won't say anymore about my dad's health because that is his personal business. I can say that things are falling into place and he is doing as well as anyone possibly could be in his situation. Any positive thoughts for him would be greatly appreciated.

I debated whether or not to post this. It's been written in here for about two weeks, sadistically fermenting and staring at me every time I go to write anything new. I finally decided to post it because this blog is my stress reliever. Plus, it will ease the thoughts of those who are concerned for my father and for me. People—particularly in the CF Community—get concerned when someone goes AWOL with little explanation because it usually means bad stuff is happening. So, I'll tell you that things are as peaceful as they can be right now. I'll still be blogging, but there will be shorter posts and they'll be fewer and further in between. With everything going on—day-to-day stuff, my health issues, my dad's situation, the "Moganko For CF" Project (which is going really well, by the way), fund raising, and other miscellaneous stuff—something had to give a little. Turns out it has to be "Joshland" for the time being. Just hang with me, everyone.

I still don't have the answer to my game of "Would You Rather?". I wish this was just one of those hypothetical scenarios that could segway into the choice of being licked to death by adorable kittens or pummeled to death by a million balls of cotton. That an easy one: The kittens...no, no, no...the cotton balls. What about kittens made of cotton balls? Man...this game is hard.

Thank you to everyone who has been so supportive in the past two weeks. I've really needed it and you came through with flying colors. Love you all very much.