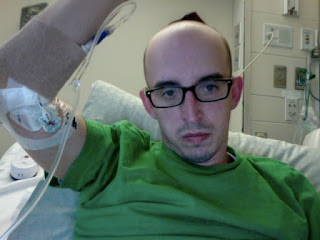 ***
On Tuesday afternoon I laid tensely on the bed in the vascular access procedure room. It didn't help that the doctor placing my PICC line IV had to ask for a second opinion more than once. She gently pierced my skin with a shot of lidocaine that numbed the injection site. I wished the lidocaine would have traveled up to the limbic system of my brain because I was a emotional basket case and could have used a break in my day.

The walls that were closing in on me from nervousness and the mild sedative they used to open up my veins, so I tried to find one object to focus on. I chose a picture of dogs stacked in a pyramid with a cat in a tutu on the top. Underneath the picture it said:

"Never let them see you sweat."

Now I was annoyed on top of being nervous. First of all, don't dress your animals. Don't photographers realize how traumatized a cat is when you stuff it into a tutu? And don't give me that crap about Photoshop because I've seen the costumes at the department stores. I know what people do in their spare time. Secondly, these are cats and dogs. They generally sweat by panting which means their tongues are hanging out for the world to see. It would be impossible for them to hide their sweat. I mean, come on! My cairn terrier has a conniption fit when we turn the water on in the bathroom because he thinks he MIGHT be getting a bath. Finally, I noticed this picture was the only form of non-medical decor on their walls. I can only speculate what they say to the kids getting PICC lines:

FOCUS ON THE KITTY IN THE TUTU?!?!?! Sweet Lord in heaven! I was about to go on a sedative-induced rant when I felt a sharp pain inside my arm and heard the vascular doctor say:

"Oh shoot, you're veins are constricting."

In my head I said "NO SHIT, SHERLOCK.", but out loud I groaned "Is ThErE AnYtHiiiiiNg I cAn Do To ReLaX tHeM?!" She calmly said to take deep breaths in an out while she maneuvered the tubing round. "Really?! Just gonna dig away in my vein, lady? Don't mind the grimace on my face. While you are at it, grab some rusty pliers and start yanking out hairs from my nether regions." I thought to myself. I tried to tell her that aloud, but I was kinda loopy from the sedative and I was in a lot of pain, so the sounds that came out were more like grunting than actual English.

Alas, the vein collapsed and she was forced to start over. Round two was uneventful except for the fact that the line was placed near my elbow, so now every time I bend my arm there is this nagging pain. Stupid doctor. Stupid veins. Stupid cat.

Such is life in the hospital. Carly and I had a feeling this was coming, though it was certainly not from lack of effort. I did everything I could to avoid the hospital from the moment I got sick this fall. I took extra meds, did extra therapies, I was active. You can read a little about it here:

Getting Things Out Of My Chest

In my mind I felt like we hadn't worn out all the options like we usually do, but I knew my body was exhausted. Between having night blindness from my vitamin A deficiency like I had in 2009 and moving slower than rush hour traffic from shortness of breath, I was like a fighter in the final round. Grasping at the ropes, refusing to go down, but strictly on the defensive, it was time for a counter punch. I decided to call the clinic.

Joshland Note: I know "the fighter analogy" is a little tired and annoying to some, but it suits my mood and I couldn't think of a clever metaphor that involved fluffy bunny rabbits...I tried, believe me.

I got a call back from the clinic later and I wasn't pleased with what I heard. "The oral antibiotics are helping you maintain your current pulmonary levels, but you aren't getting back to where we all know you can be. Many of your vitamin levels are undetectable." they said, and continued on—with a little hesitation in their voice— saying: "It might be time to consider going on I.V. therapy for a while."

When those words floated into my ear my whole body tensed up. I hate the hospital. It's always been a last resort. It triggers feelings of anger and frustration. Words like "consider" automatically make me think of the words "tune up". Back when my sister was on this earth, a "tune up" could me anything from a few weeks to a few months in the hospital. One time, my pint-sized older sister slugged her doctor as hard as she could in the shoulder when he suggested she go inpatient. It was easy for him to say because he wasn't the one who had to do it. The doc got to go home at night and see his family. He got to disconnect from all this CF stuff. I know a lot of doctors who take their work home with them, but it's still not the same. It wasn't back then and it isn't now as I sit in Angela's shoes.

It was a short stay in the hospital, but they are never short enough. Between minimal sleep, constant traffic in and out of my room and daily discussions about my health care plan, I was slowly going insane. Thankfully, I'm back at home, a bruised PICC line IV in one arm and a puppy in the other. It's by far the easiest I.V. schedule I've ever had, but that doesn't mean that it's ACTUALLY easy. It's still lots of prep work for a 10 push I.V. 3 times a day and a neon green multivitamin gravity drip. I'm coughing up a rainbow of goo, which means the meds are working, but it's gonna get worse before it gets better. My wife has taken on the brunt of the chores right now because I don't have the energy to do it, not too mention being my voluntary nurse. When I asked her why she loves me so much and how she deals with all this B.S. she said: "You are the nicest person I know and I love you so much. You are worth the extra work." That is love.

That's why I'm not complaining. You see, for every PICC IV I've had, I can damn sure guarantee that a lot of my CF readers—some of which are half my age— have had 10 times that many. I'll be done with my I.V.s in a few weeks while many of my kindred spirits will be on them for MONTHS with no breaks. It's a pain the ass and I know how mentally tough you have to be to get through it. I have so much respect and admiration for them.

That being said, I'm not going to pretend that this isn't hard for me. Things are changing in my life—MY CF journey—and I am learning to adapt. Am I getting worse? Is the phrase "tune up" or a slightly less offensive euphemism going to be part of my day-to-day jargon? The truth is...I have no clue. I'll find out soon enough, so I'm not going to worry about it. I've got more important things to focus on...like getting better.