Beyond CF: My Buddy, Randy

Joshland Note: It's time for a guest post by one of my best friends, Randy. You know...the guy in the "Voyage To Lambeau Field" video blog. He drives me nuts, but I love the kid to death and I know if I ever need anything he will be there for me instantly. So when I asked him if he wouldn't mind answering a few questions for my readers he was all for it. Now for your reading pleasure, here is a no punches pulled perspective from from the Big Man. Thanks bro. Love ya. 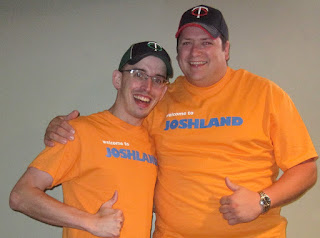 Hello to all you "Joshland" friends,

Josh asked me a while back how I would describe our friendship. When I asked him why he wanted to know, he explained that several people have asked him this question: "How do you maintain close friendships when you have CF?" I guess I'd never really thought about it. We were just great friends that got along extremely well. I've known Josh since we played baseball in grade school. We didn’t really hang out, but were on the same team for years. That’s where he first earned my respect. For what ever reason, the poor guy would get drilled with the ball once or twice a game when he was at bat. This happened every single game for three years. Personally, I would have quit because that didn’t sound or look fun at all. Not Josh. He'd get bruised up every game, but he always showed up for every week to take his lumps.

After baseball we were still friends, but we never really reconnected until after high school. It all started with a house party we were both invited to. I'm pretty sure there was nothing but lemonade and finger sandwiches served at said party, but my memory is a bit fuzzy so I could be wrong. This is where our friendship really took off though. We were both avid wrestling fans and watched it together every Monday night. We also developed a mutual love of the Blues Brothers which became an obsession! For months we practiced songs and a created a whole routine that we performed at karaoke parties.. Oh yeah...we were good! Now, I fully admit he is slightly better at the whole singing thing, but only slightly and if he tells you differently he is a damn liar.

Some of my best memories with Josh have been us just hanging out and ad-libbing off of each other. Neither one of has ever really cared what people thought. We're just out to have a good time and entertain people. A perfect example of this is the time we were in line at a fast food restaurant:

So I'm first in line and Josh is standing behind me. Keep in mind I am about two times bigger than Josh so he could stand behind me unnoticed. There was this cute girl working behind the counter. When she was finished taking my order, she asked "Will there be anything else?" I smiled and said (without telling Josh) “Would you like to see my dancing monkey?” After she shot me a slight smile and confused look, I jumped to one side with my hands pointing to Josh. He looked at me, then her and started doing a goofy dance. We roared with laughter and she had a big smile on her face that made it all worth all of our stupidity. We still laugh about it to this day.

While our lives have taken different turns, we still remain great friends. We both push each other to be better people. It doesn't matter if he is being stubborn by trying to do something on his own that he knows he needs help with or I'm being jackass and saying inappropriate things at the wrong times. Neither one of us takes offense when called out by the other because we know we just want the best for each other.

Josh also told me that a lot of people have asked him this question: “How do your friends react to you having CF?” I hope you've noticed that I never mentioned his CF once during this entire post. While we do talk about it when something new comes up with him or he has to spend some time in the hospital, it doesn’t effect our friendship. With or without it he is my best friend because we listen to each other and just love to have fun.

It makes me sad that so many people aren't able to find a true friendship. Too many people worry about what others think of them and try to please everyone. The truth is that you CAN'T please everyone and you should just accept people for who they are. I have problems and I've made decisions in my life that have lead me down a path many don't agree with. SO WHAT?! Josh has been and will always be there to listen and to give advice or encouragement when I need it. The way I look at it, Josh deals with CF daily, so he doesn't need another person to dwell on it for him too. That's why we just have fun and don't worry about the hard stuff until we need to. Shouldn't all friendship be that way?

Thanks for for letting me share some stories, Josh.

Joshland note: Here is a little anecdote that encapsulates my friendship with Randy. Blunt, honest, and thoughtful. There is only one Randy. :-)

Josh and "The Big Man" Randy
Posted by Josh