Parasailing Without A Helmet...Or A Brain


Joshland Note: This story came from A"Joshland Question" I received from my blogging buddy, Jenna from Jenna's Jargon:

What is the most daredevil thing you've ever done, and did you regret doing it?

Jenna - I promise I'll give you a full answer next post, but this question reminded me of a great story that I had to share with everyone first. It's another ridiculous thing I've done thanks to my best bud, Chad. I can't give him total credit though, since I do have a brain of my own. This particular event happened during an unsupervised summer weekend. Don't all the best stories from childhood happen when parents are away?: 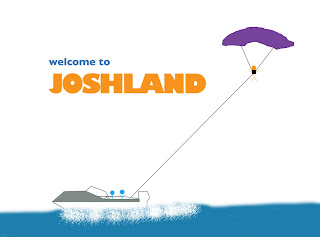 On a few wonderful summer weekends during my junior high and high school years, Chad invited me to spend some time "up north" at his family's cabin. These were weekends full of county fairs, late night campfires, and maybe a beer or two. Hey, I never said I was a saintly kid, but we never went anywhere after we had beer...I swear! Above all, my favorite thing about the cabin had to be when we were out on the speedboat. We'd be out on the water from lunchtime to sunset, skiing, knee boarding, and inner tubing behind the "Sea Nile", all the while acquiring life jacket tans and filling our ears with the sound of Beastie Boys or Alan Jackson cassette tapes distorting from blown-out boat speakers.

On one particular weekend, Chad and his brothers had procured a parasail to pull behind the boat. The whimsical way my "brothers" described the previous weekend's test run of the parasail were mezmorizing. Soaring 150 feet in the air where there isn't a sound to be heard and where the sun seemed to be within arms reach was something that I was very interested in experiencing. There was one problem: I hate heights. I'm pretty sure this fear stems from childhood near-death experience I had. I was climbing a tree, making my way up branch by branch only to lose my footing and fall back into what I though was certain doom. Thankfully, I hit a large branch that saved me and took the brunt of the first part of my plummet to the earth. That, in turn, decreased the speed of the branch-to-ground portion of my trip, leaving me with a bruised back and a need for clean underwear. Like many fears, I'm sure this fall has been greatly exaggerated in my mind, but that was neither here nor there. My Achilles's heel made me unsure if I was brave enough or stupid enough to attempt this parasailing adventure. Luckily, I have clever friends that talked me into it while walking me toward the speed boat. Aren't they great? Plus, I knew Chad would never put me in harms way.

While we were zooming toward the other side of the lake and the original-but unused boat launch, I got my first look at the parasail. Yes, this was a "real" parasail, but not one of the huge ones you see in travel brochures with a national beer sponsor printed on it and two smiling people being whisked in the air. No sir, this was a rag-tag parachute that looked like it was sewn together by a junior high home ec. class. There were random patches from previous "joyful rides" that clearly went awry. The weirdest thing I noticed was that the entire parachute - which was just used the previous weekend - was covered in a thin layer of dust. It didn't take me long to find out why...

As the boat began to slow down, I looked toward the front to examine the launch area. What I saw was a fifteen foot path of dirt, river rock, gravel, and tree roots surrounded by several summers worth of discarded beer cans and 3 foot cattails on the waters surface. Thank goodness for my sexy and totally un-nerdy Aquasandals, otherwise my feet would have been sliced to ribbons.

We unloaded the parasail onto the boat launch and Chad started to strap me into the harness. The ties and buckles on the harness were strong, but they were also well worn and had begun to fray from nearly every stitch. The parasailing rig I used that day made everything...ahem...secure. Straps were tightened. Buckles were snugged. Nothing was given room to adjust. NOTHING. No me gusta. My adrenaline started to rush while Chad and his brother carefully laid the parasail out on top of the gravel.

And now for your amusement, here is the paraphrased and memory-pieced-together "pre-launch briefing/pep talk":

Chad: (interrupting) "Just listen to me. The parasail is spread out so that as soon as the boat picks up speed, you are going to pop up in the air. Trust me. We did it all last weekend. I know from experience."

Joshland Note: All TWO TIMES that he did it!

Chad continued: "When my brother hits the gas you start running in place so that your feet and legs don't drag on the ground. Just remember the signals: cross your legs if you want to come down and scissor kick if you want to go faster and higher and you'll be fine. Oh and DO NOT TOUCH THE SILVER CLAMP ON YOUR HARNESS!"

Josh: (As the fear causes his body to tremble.) "WHAT?!? Why would my legs drag on the ground?! Isn't this thing supposed to go in the air?! What happens if I touch the clamp?!?! What if I fall? I don't want to fall!"

Chad: "So...DON'T FALL." Only Chad could say that and keep a straight face. For some reason it calmed me down. It SHOULDN'T have calmed me down, but it did. Until the countdown...

My heart was pounding so far out of my chest I had to hold it down and my feet were moving so fast they turned into those little cloud circles that happen when Speedy Gonzales starts revving up his mousey little engine.

Before I could tell him I changed my mind, whooooooSSSHHHHH! I was up in the air!

"WHERE THE THE HELL DID THREE GO?! I PRETTY DAMN SURE YOU DON'T SKIP THREE WHEN YOU ARE COUNTING TO IT! IT GOES ONE, TWO, THREE, YOU ASSHOLE!"

That is what I would have yelled at him if I hadn't lost the ability to breathe out thanks to the atomic wedgie that I had from the harness and the petrified feeling I had from being plucked right into the air. Once I regained my ability to speak and curse, I started screaming at Chad to get me down. It was reminiscent of the water skiing scene in The Great Outdoors. I believe my words were "I'm going to die up here, you bastard!" which Chad and his brother interpreted as "I want to go higher and faster." Honest mistake. I'm sure of it. So up, up, up I went.

Eventually, I realized that they weren't going to let me down for a while, so I took a moment to admire the view. One the one hand, it sucked. I don't care how pretty you make it, fear is a fear. Even though I try to face it whenever I can, doing so is never fun for me. On the other hand, I do remember a moment of triumph and pride in there, too. Sure, I was in tears and I momentarily lost my ability to manage a sane and rationale thought, but I was doing it, man! I was living the dream!

Okay...done now. Dream lived. Get me down on the ground, please.

I somehow recalled the "signal system" they had devised. I knew it had something to do with my legs, so I just started flailing them in all different directions. I think Chad figured out what I was trying to tell him when he saw me dancing the "Electric Slide" from up in the "wild blue yonder". I landed in the water with a graceful splash and doggy paddled my way to the boat where I was shivering and silent.

"How was it?" Chad asked. I attempted a chattery smile and gave him a thumbs up. On our way back to drier and firmer ground, Chad told me he was proud of me. I kinda was too. I couldn't believe I did it, but looking back now I'm not surprised that I did. I trusted my friend. He was my brother and my hero. I went parasailing for me, but I also did it for him because I wanted him to be proud of me. I guess it's hard to explain why one person would put himself in a precarious position just to make his friend proud of him, but when you are a teenager with few friends to begin with that means you have to work hard to keep the friends that you do have. The loyal friends who are there for you when every other friend disappears from your life. Lucky for me, I never had to worry about loyalty with Chad.

The funniest part about this story is that when some more people showed up later that day and went parasailing, one of them got stuck in a tree during a launch. Maybe that whole "Chad would never put me in harms way" thing was a load of crap. :-) We're just two friends who did (and still do) dumb stuff together. Either way, it makes for a good story.