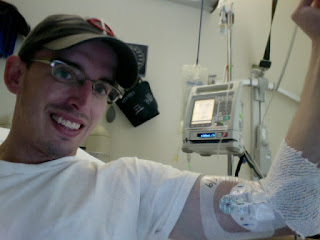 "Lord almighty, I feel my temperature rising! Help me, I'm flaming, I must be a hundred and nine! Burning, burning, burning, and nothing can cool me! I just might turn into smoke, but I feel fine!"

Anyone else end up in the hospital this weekend and a fever of 102? 'Cause I did. It's my second stay in less than a month, which hasn't happened to me in years! I was incarcerated straight from what was supposed to be my follow up appointment for my previous hospitalization. To make matters worse, I forgot to pack a bag again. Forgive me, I'm an optimistic pessimist. The fever had come and gone since Memorial Day evening. We're not sure where it came from, but here are three possibilities the docs and I came up with:

1. Traveling - I went to California two days after getting out of the hospital. I wore a mask on both flights and washed my hands like I had OCD, but I still could have caught something. Living life is always a risk when you have a chronic illness. I used to stop myself from living, but thanks to my wife I remembered that not doing things isn't much of a life. I'd take the same precautions and do it again because life is too short to worry.

2. Possibly 'California Feverin' - "Valley Fever" or coccidiomycosis is a fungus/viral illness native to the southern part of the U.S. It causes fevers in CFers that randomly rise and fall and might have fit neatly into Casa de Josh, causing a new breeding ground for grossness. By the way, why do all of these terms sound like terrible STDs? I swear Carly, I only have eyes for you!

3. C. Difficile Infection - is a bacteria that infects the body due to use of antibiotics. This is a pretty common side effect for me whenever I go on any type of antibiotics. My digestive system is sensitive as it is and when you attack it with potent drugs that kill good and bad bacteria....owees can and usually do happen. That's when probiotics come in. These little drugs help restore the good bacteria in the body and cut down the chances of C. Diff infections. Think of it like the "Eat Me, Drink Me" scene in Alice and Wonderland. Improper amounts of these "magical biotic pills" can throw everything out of wack. Once you figure out the right combo, then it's not too hard to manage.

The most entertaining part of this option is the treatment. One would think that the best way to treat an infection caused by antibiotics would be to STOP taking them! However, if I do that before the other "bugs" are eradicated, then they can grow back and become immune to that particular antibiotic. Soooooo...the treatment for C. Diff is........MORE antibiotics! Different ones, mind you, but more drugs none the less.

Long story longer, after two days of lots of inconclusive tests and potent IV antibiotics, I am back home, feeling better, and recouping...AGAIN. But this time I'm on at least at two weeks of home IV's if my stomach can take it. Ugh. Stay tuned...I'll try my best to make this stupid stuff entertaining. The important thing is that I'm on the mend. No worries. :-)

I don't know how any of my friends who are frequent hospital visitors - regardless of their illness - do it so often and I sure as hell don't have any clue how Angela survived her multiple month stays in back in the 80's and early 90's during the dark ages of CF. Actually, I have a guess... I think it's because no matter if it's for a weekend or for months, we survive because it's one of the things we do best. Much love and respect to my friends who take it all in stride.

Having great nurses helps a lot, too. They put up with my smart ass remarks and dished them right back. :-) Thanks Calli and Katie. You and the rest of the staff made things tolerable. 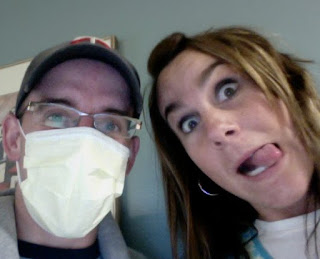 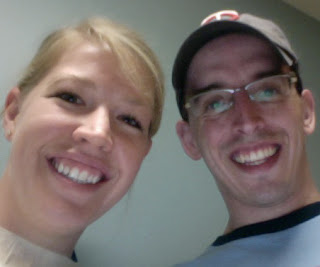 I'll leave you with a humorous thought from my short but stupid hospital stay: 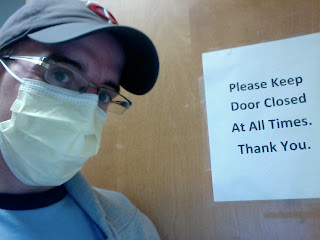 With the exception of walks outside for fresh air and a change of scenery (because exercise is important), I turn into a hermit when I am admitted. I saw my sister get sick in the hospital enough to know that there is nothing good out in those hallways. Only sick people germs. That's why I had this sign posted on my door. What part of this sign is hard to understand? My nurses and nurse's aides were pretty good for the most part, but the rest had very short term memories. Even one of my doctor's admitted that they didn't even see the sign...on the door...at eye level! What?!?!?! They got a little good natured teasing for that. :-) This may be a future social experiment that I'll need to test via video.