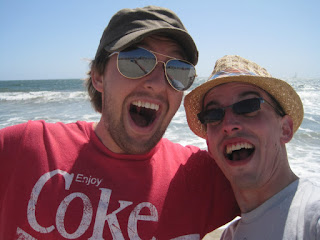 Fresh out of "The Joint", I boarded a plane headed for California to visit my cousin, Andy. This was something we had planned months before all the hospital garbage happened. It was a weekend full of movies, video games, late morning cafe breakfasts, and driving around L.A. with one of my best friends. Unfortunately, because I wasn't at 100%, I was pretty lame. I was so exhausted that I couldn't make it past 10:30 without nodding off, which is when things in L.A. are just getting started. I wish I'd had my normal gusto, but IV and oral antibiotics just take it out of you. Still, this mini-vacation was just what I needed because it served a plethora of purposes:

First of all, I got to see Hollywood, CA. I'm a movie buff by choice and circumstance, so its only natural for me to check out the "Magic Store". Being in a place where everyone has the dream of being "somebody" was an interesting experience for a Minnesota boy who keeps things pretty mellow. There are some strange cats out in Hollywood and that was entertainment in and of itself. On a side note - I also have a goal of visiting all 50 states before I kick off, so I am one state closer. 18 out of 50.

Secondly, Angie was there with me. She would have LOVED to go to Los Angeles! Seeing memorials of Marilyn Monroe in person instead of just pictures on her bedroom wall and the dream of being - and I quote - "a six foot blonde with big boobs". Seeing "The Tonight Show" live in the front row rather than on her 12 inch TV while hooked up to her third dose of IV antibiotics would have been a top priority. Spinning the Price Is Right Wheel backstage at CBS Studios (if she could have gotten it around. Damn, that sucker was heavy!). It would have been an amazing experience that she would've treasured, but it wasn't meant to be. While we were sitting in the cavern that is Grauman's Chinese Theater, I told Andy that everything I do always has an "Angie Purpose". Trips, Moganko, my house, my life. I'm living the life she wanted to live AND the life she wanted me to live. She is a great reminder if I ever need a kick in the ass. Live for Ang and for myself. Miss you, sister.

And last but not least...Andy. When I talk about how important having dreams - big and small - are, Andy is a great example. All he's ever wanted to do is make movies and make people laugh. It took a few years for him to build up the courage to move out there, but with his determination and a little encouragement from his family and friends he made a big leap. Regardless if he ever makes it big, he's already successful in my eyes because he had the guts to follow his dreams. Kudos, M'boy!

We've been close since we were little kids, always causing trouble and having fun. I like to say he is like me with the volume turned way up, but the truth is that Andy lives in a world of his own full of creativity and off the wall humor. Sometimes that's the problem. He's always "on" so people rarely get to see the other parts of his personality. On the last day of our trip I challenged him into answer a single question seriously. The answer that I got was pretty special. At least, I appreciated it and I think the people that know him will find it enlightening. Here is that little interview:

In addition to his movie making talents, Andy composes music for all of his film projects. I utilized that talent during my trip and the result was (and hopefully will be) the foundation for a new song made especially for those CF kiddos - young and old - out in "Joshland". Stay tuned for that. Thanks for your help, Roo. There will be a lot of happy families thanks to you.

I'll leave you with this trailer for his web series "Son of A Pitch" and a link to his website for all of the episodes and his other zany antics. THESE ARE NOT APPROPRIATE FOR YOUNGER VIEWERS. Love you, Andy. You are one of a kind. Thank God!