The Voyage To Lambeau Field


This past weekend I was lucky enough to be in attendance for Bert Frave...I mean Brett Favre's return to Lambeau Field to face the Green Bay Packers.

If you are not a sports nut I'll sum it up: Future Hall of Fame quarterback Brett Favre ended up leaving the Packers after a sixteen year career there under...shall we say...extenuating circumstances. Through a series of events, he eventually became the Minnesota Vikings QB. As a result, November 1, 2009 was the date for possibly the most hyped game in recent football history . I had always wanted to go to Lambeau for a Packer/Viking game and had bought my ticket before Brett was even a factor. Now the pieces were in place, the intensity level was off the charts, and I was going to be there!

One of my best buds, Randy, was my co-pilot on this voyage. We have been friends since we were little kids and enjoy being stupid together whenever possible. Since I knew how difficult it was going to be put this trip into words, we took the opportunity to be stupid one more time and create a video blog that would capture how electric the atmosphere truly was. 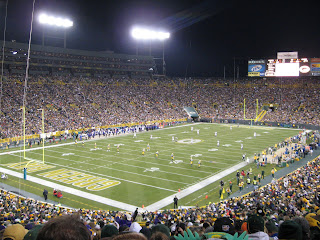 We interviewed several fans from both sides and everyone we talked to loved the idea of a video blog. Randy and I were pleasantly surprised how willing people were to participate in our buffoonery. I intended to put a longer version with more footage on here, but it was too large of a file and I couldn't upload it. Oh well. The chopped down version is still pretty damn good. We also made it on Fox 9 News, but didn't want to deal with any copyright issues, so I didn't post it on here. ;-( I channeled my inner pro wrestler and said the game was going to be insaaaaaaane!

Before this trip I wasn't completely convinced that we needed a new stadium in Minnesota, but after this weekend I have changed my mind. Outdoor football is awesome and I hope the people of Minnesota can figure out a way to make it happen.

From the stadium tour (which was awesome and a must if you are going to make the trip), to tailgating, to the actual game itself, it was a once in a lifetime experience. Lots of love to Randy for all the help and being a great friend and also to Dan and Liza and their crew for feeding us and showing us a good time...and then feeding us some more. ;-)

Here is the video blog of our trip. Enjoy it and look forward to the normal format next post. SKOL VIKINGS!