My Buddy Bruno And A Dome Goodbye 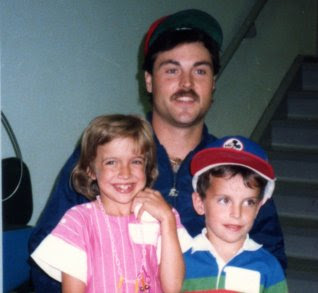 From the moment I met "Forever Twin" Tom "Bruno" Brunansky, I knew there was something special about him. Back in 1985, Angela and I were the poster kids for the Cystic Fibrosis Foundation and were lucky enough to meet a few celebrities and athletes during our tenure. While the other athletes did the normal "meet and greet" (which I am not sneezing at, believe me), Bruno took it to the next level. He would always give us big bear hugs, ask us how school was, send Angela the occasional letter from the road, and call on birthdays when he had a moment during the season. Not because he felt obligated to, but because he really cared about us. 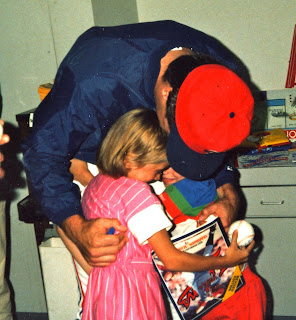 As the years went by, our relationship with Bruno grew closer and closer. And in 1987, when the Twins made it to their first World Series since 1965, we attended Game 6 to cheer them on. We wrote Bruno good luck letters that we gave to his fiancee (now his beautiful wife) to ensure their delivery. We also made a sign that said "We Love Bruno Too" which was an homage to her sign "I Love Bruno" that she took to every game. It was an incredible night that Bruno had a huge part in. He scored some key runs that were cushioned by Kent Hrbek's Grand Slam! I recall watching TV the next morning and seeing a picture of Angela and I in his locker when he was being interviewed after the game. You don't do those things unless you love somebody. That was worth more than the World Series to us.

Even after he was traded to the Cardinals in 1988 (don't even get me started on that debacle), Bruno still made a point to check in with us from time to time. Always a solid ball player, he was a journey man throughout the rest of his career spending time in St. Louis, Boston, and Milwaukee. No matter who he was playing for he always chatted with us whenever he made it back to town. The last time I saw him play a game was was just prior to the baseball strike in 1993. He was on the Milwaukee Brewers squad and was in town to battle the Twins. I caught his attention from the stands before the game started and we had a brief conversation. Before he left he threw me his Brewers hat which made me the envy of every other kid in the stands.

I've been lucky enough to stay in contact with him over the years through catch up phone calls and emails. During one of our more recent catch up moments Bruno told me he was selected as a player on the All-Metrodome Team and would be in Minneapolis for the final home weekend. Luckily, our friends Chad and Kari came across some extra tickets to the second to last game which was a "meet and greet" with former Twins, so off to the Dome we went. Prior to seeing Bruno, my wife said I was very giddy. I flat out denied it at first, but I have to admit that every time I get to see him I turn into that six year old boy again. And guess what happened when I saw him? I still got that big bear hug! It's very fitting that Bruno and I were able to come full circle at the final weekend of Twins regular season baseball in the Metrodome. I know Angie was smiling down from heaven as her all-time favorite baseball player and her brother were remembering all the good times and her sweet spirit. 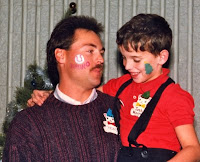 Tom Brunansky is living proof that there are athletes who realize the wonderful gift they've been given and work hard to make the most of it. He never let fame go to his head while he was in "the show" and continues to pay his gift forward to everyone he meets. Thank you Tom for being a hard working ball player and a Minnesota fan favorite, but more importantly...a great man. I love you Bruno and Angie does, too. 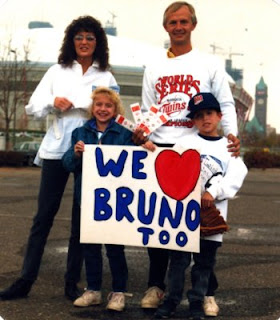 A thought occurred to me while I was watching my final game. I realized that another small piece of Angela was disappearing from this world. The Dome was a special place that housed a lot of significant memories with her. I would never be able to point down to the seats we sat in with my family all those years. I would never be able to say I sat right over there for Game 6 of the '87 or '91 World Series. I would never be able to walk the corridor of the Metrodome, with it's stale sauerkraut and onion aroma, in my Twins gear ever again. My emotion finally overwhelmed me on Sunday when we started looking though the old pictures of us with Bruno, Bert, and Kirby. I just started bawling out of nowhere. I must have needed to let that out. I'm sure I'm not the only one whose heart is aching right now. 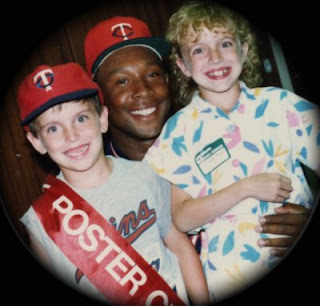 The Metrodome may be gone after this year, but the memories will never die if we keep them in our hearts. Next year there will be new memories. Somewhere within the friendly confines of Target Field there will be a six year old boy just like me who'll get to meet Mauer, Cuddyer, and Span. And the world keeps spinning 'round 'n 'round....


Peaceful Things and Love to Big B,

(It ain't over yet! A one game playoff with the Motor City Kitties starts this afternoon. We're gonna squeeze out all the "Dome Magic" that we can. GO TWINS!)
Posted by Josh