A Baseball Birthday in Boston 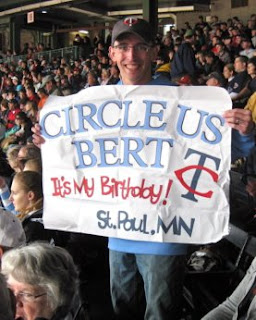 As we headed for the the ballpark adorned in Twins gear from head to toe, I was so giddy! A few days earlier, I found out that I was going to Boston for my 30th birthday with my wife and our closest friends! With a big grin permanently stuck on my face, we stepped on the Green Line of the "T" Train - Boston's transit system. I felt like the four of us were in a baseball-themed version of "Where's Waldo". Can you find the Twins fans in a sea of Red Sox rubes? I was a little intimidated after I asked Carly what stop was for Fenway Park. The entire car full of the "Red Sox Nation" answered "Kenmore!" in a thick New England accent. I probably could have figured it out by following the people with B's on their hats, but the funny thing about that...the percentage of people in Boston with some form of Red Sox attire is far greater than the portion without. I may have ended up on the other side of town if I chose the wrong person to follow. Don't mock me just because I am directionally inept.

The feeling of intimidation slowly disappeared as the days progressed. Everyone we talked to was "wicked" awesome. There was a couple who were excited that we made the trek to Boston even though they warned me that "the Sox are gonna light your ass up". Another Bostonian told me he hates every team the Red Sox play, but hates us less because we "bleed simila' colors". The best conversation by far was outside of the bathroom (or the "pissa" as I was told to call it). This guy was a stat machine and started naming off Twins who played for the Red Sox and whether they were any good. Eventually he got to Tom Brunansky, who was a member of the Twins 1987 Championship squad and, I am proud to say, a good friend of mine. I name-dropped Bruno and this guys eyes lit up. He said he loved Bruno and told me about how he got the Red Sox into the playoffs with a diving catch in 1990. I looked it up on good ol' Wikipedia and there it was! Even when I was holding a hand-crafted sign that read "Circle Us Bert, It's My Birthday" that Kari made for me (a special surprise), I received nothing but well-wishes and a little bit of ribbing which I gladly took in stride. 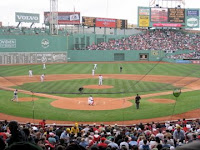 Boston fans are hardcore fans that live and die with their team. I would call them intense but friendly. You can feel their energy within its confines of Fenway Park. Murals cover the walls and retired numbers are shown throughout the entire stadium. It's a dying breed in a sports world filled with stadiums named after corporations. When the first game was delayed due to rain, the fans didn't leave. They simply headed for the concourse and drier ground...and Fenway Franks, Sam Adams Beer, and anything else they could consume while they waited anxiously for their heroes to return to the field. Fenway had turned into a giant pub. They stayed until the last minute when the game was officially called off and the two teams would meet in a double-header the next day. Even though the Twins were pummeled both games by the Bo-Sox, who decided to hit a few homers to feed the "Green Monster" - the affectionate nickname for the vertically extended wall in left field, we had a great time in a classic stadium. It made me excited for outdoor baseball next year in Minnesota. Not in April though...brrrrrrr.

During this trip I realized my body is a little weary. While Carly, Kari, and Chad all strolled along at a steady pace, I struggled to keep up. My lungs were aching because I didn't want to go back and do a therapy in the middle of the day. My leg was numb from all the walking we did which was excellent for me, but really pushed me to my physical limits. I was truly grateful that as we saw the sights of Boston - The North End "Italian District", USS Constitution, Boston Duck Tours - no one mentioned how slow I was. They would wait for a moment never making a big deal about "Ol' Slowpoke Josh". The trip was fantastic and I am not complaining one bit, but I wish I felt as good 30 as I did at 20...or even 25.

I cried a little as I stayed up to do a chest therapy the eve of my birthday. Never in my wildest dreams did I imagined watching a double-header in Boston with three people I loved. You see, I used to loathe my birthdays. They seemed like a countdown to me rather than a celebration. While everyone else seem to revel in accruing another year, I became depressed because I was running out of time. It's only recently that I've understood the purpose of them. It's one day out of the year that everyone should have the opportunity to feel important. I definitely felt that way all week. Thirty years of a life that I was not supposed to have were being celebrated and I took it all in.

Thanks to my family and friends who all kept a secret and were a part of the several birthday celebrations which made my 30th birthday wonderful. Each one was amazing. Thank you for loving me so much. I promise to make the next thirty years the best they possibly can be. In closing, here is a video I created of my visit to Fenway Park. Sing along if you'd like...