"I Got The CF", But I Could Have It A Lot Worse 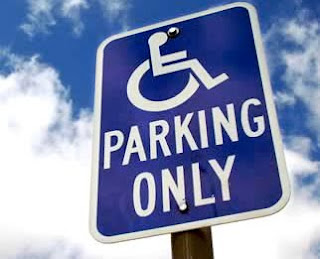 One of my greatest lessons in humility thus far came at the same time as one of the most awkward and funniest moments in my life.

It was around Christmas time of 2000 and I was out and about on a Saturday doing some last minute shopping. Of course, there were no parking spots to be found close to the mall except for the handicapped permit spots up front. At the time, I had a permit at my disposal and used it sporadically at best. I never used it unless there were multiple others parking spaces available, or I had to use the restroom (which is a symptom of my illness and an all-to-common occurrence in my day). This time was neither of those reasons. This was a “I am annoyed with Christmas shopping and the B.S. that goes with it” time, so I decided to use my privilege in a selfish manner and sped through the parking lot to the open permit spaces.

After I got out of my car, I felt a small amount of karma come down upon me and bite me on the ass. A conversion van pulled up in the spot beside mine and the driver’s side door opened. From out of the vehicle stepped a burly, lumberjack-esque looking fellow who was built like a condominium with legs. I opened my mouth to ask him why he was parked there when he looked healthy, but hesitated. I had a similar experience once when I was in his position and decided to reserve judgment (not to mention the fact the guy could crush me with his thumb.). It was a wise move because when "Paul Bunyan" slid the side door open, out emerged a wheel chair lift, followed by the passenger. I couldn’t help but knowingly gawk at this man as the lift made its decent downward. He was wearing faded neon orange Zubaz with a stained white undershirt that barely protruded from beneath his tattered and torn brown leather bomber jacket. His face was as worn as his jacket and I would politely describe as a cross between Gandalf the Grey and Jack Sparrow. An oxygen tank hung from the back of his chair with small clear tube that began at the tank and disappeared with in the confines of the man’s disheveled beard. On the side of his chair hung a bag and it also had a tube attached to it, which lead to an area that made it quite clear what was filling the bag with yellow liquid.

Immediately I turned away, hoping that he didn’t notice me openly staring at him. As it turns out he did, and sneered at me and I nervously smiled back and headed toward the mall until I heard his voice utter one sentence:

I stopped dead in my tracks. I knew that he was talking to me and I couldn’t help but smile. I like the fact that he asked the question. He just wanted to know what my reason was, and I respected that. He didn’t yell at me or chastise me; he just wanted a simple answer. So I gave him one even though at the particular time I was not using my permit for its intended purpose.

His sneer left his face and was replaced with a blush of embarrassment. He took a deep breath and sadly sighed out “I’m sorry.”

I was flabbergasted. He felt sorry for me?!? This man - who looked like he might fall apart if I tapped him on the shoulder and who was clearly nearing the end of his days on earth - empathized with my struggles. I was amazed and humbled. Even though my mind felt like it was in a multi-car pile up, I managed to eek out something along the lines of “no need to apologize” while I uncomfortably chuckled and occasionally let out a full on belly laugh.

“Cancer Guy”, his friend “Paul Bunyan”, and I casually chatted as we headed into the mall, and then went our separate ways. While we were shopping, we would occasionally cross paths and he would yell “HEY CF GUY! HOW ARE YA?!” I would reply “GREAT, CANCER GUY!” The people in the mall were mortified, but we both just laughed. I think we had the same sense of humor about life and even though we met briefly, we had a bond and respect for one another that was a once in a lifetime moment. We never got each others real names. Our nicknames for one another were like a secret code word in a club of two members. I never saw him again after that day and cannot imagine he is still here, though he seemed like a pretty tough son of a bitch and would not be surprised if I ran into him.

I think it is my favorite story to tell, but it may be one you had to be there for. "Cancer Guy" taught me so much in such a short time about how life could always be worse and that I need to try to be peaceful with the awesome things I have in my life. Trust me, I struggle with it every single day. Incidentally, I have since let my permit expire and – though I need it even more now than I did then – I think I am going to hold off on getting it again for a while so I can appreciate my mobility while I have it.